I have a story to share with you today. Thankfully it has a happy ending but unfortunately, it also has a short nasty part to it. When you read it, you will understand what I mean.


~
I went for a walk with my two daughters and son-in-law on Saturday morning and on our way home, I noticed something laying on the sidewalk close to the grass. At first it looked like a wet brown leaf but taking a closer look, it turned out to be a little brown bat. The poor little thing was lethargic and barely could lift it's head up.


Not being able to touch it as it was, we hurried home to get a box, some water, garden gloves, and to also give our local wildlife rescue center a quick call. We were told that we could bring him to them. They would try and find a wildlife rehabilitator for him but if they couldn't find anyone who could take him, they would try and set him free. If he was to badly injured, they would have to euthanize him though and we totally understood that.


Off we went, this time with the car to where we found him. The little critter was still laying on the sidewalk and still no activity at all. I put a little water in the bottle cap, moved it towards his little face but he was scared and sort of hissed at me and showed me this sharp teeth to make me stay away. 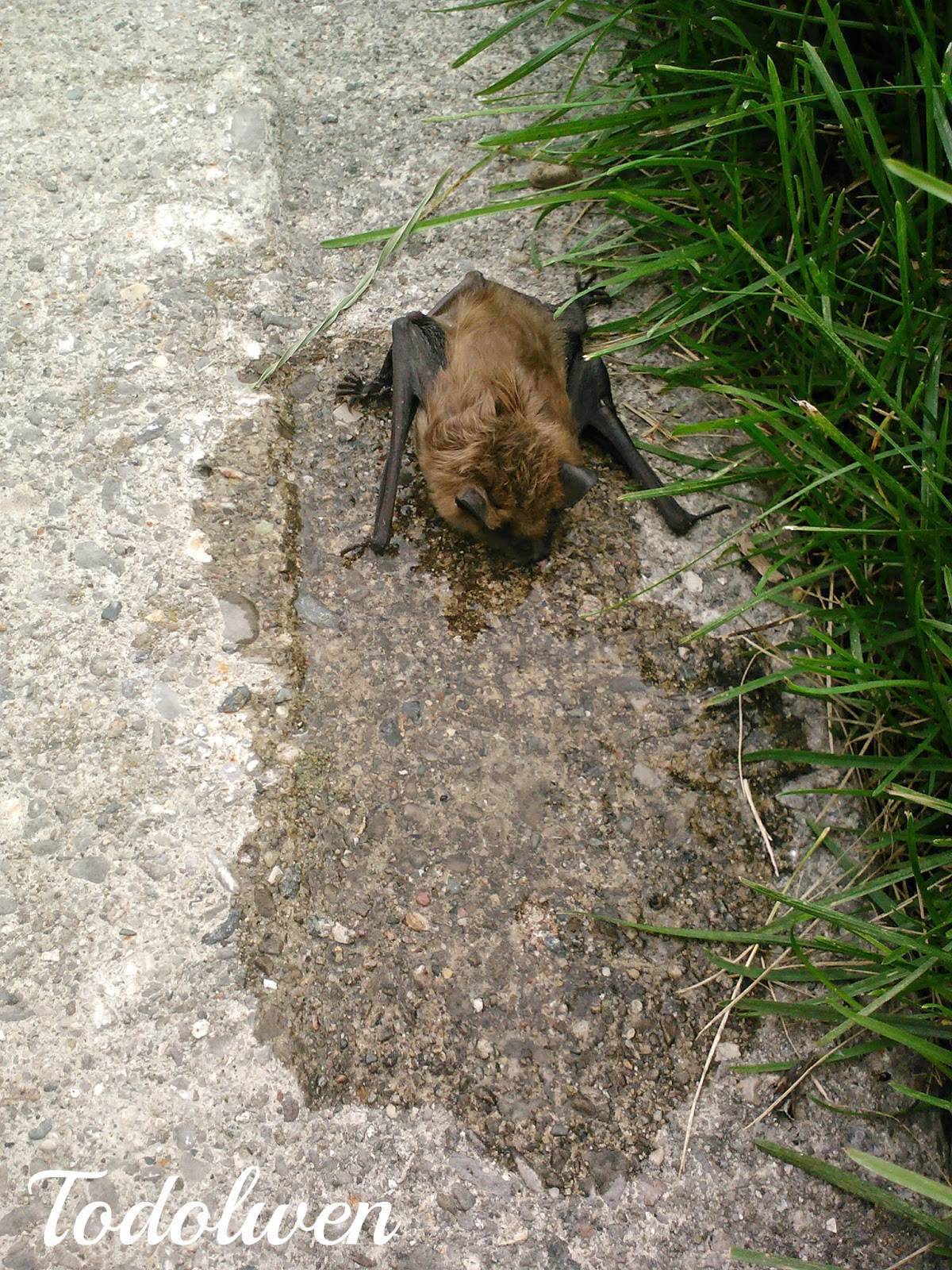 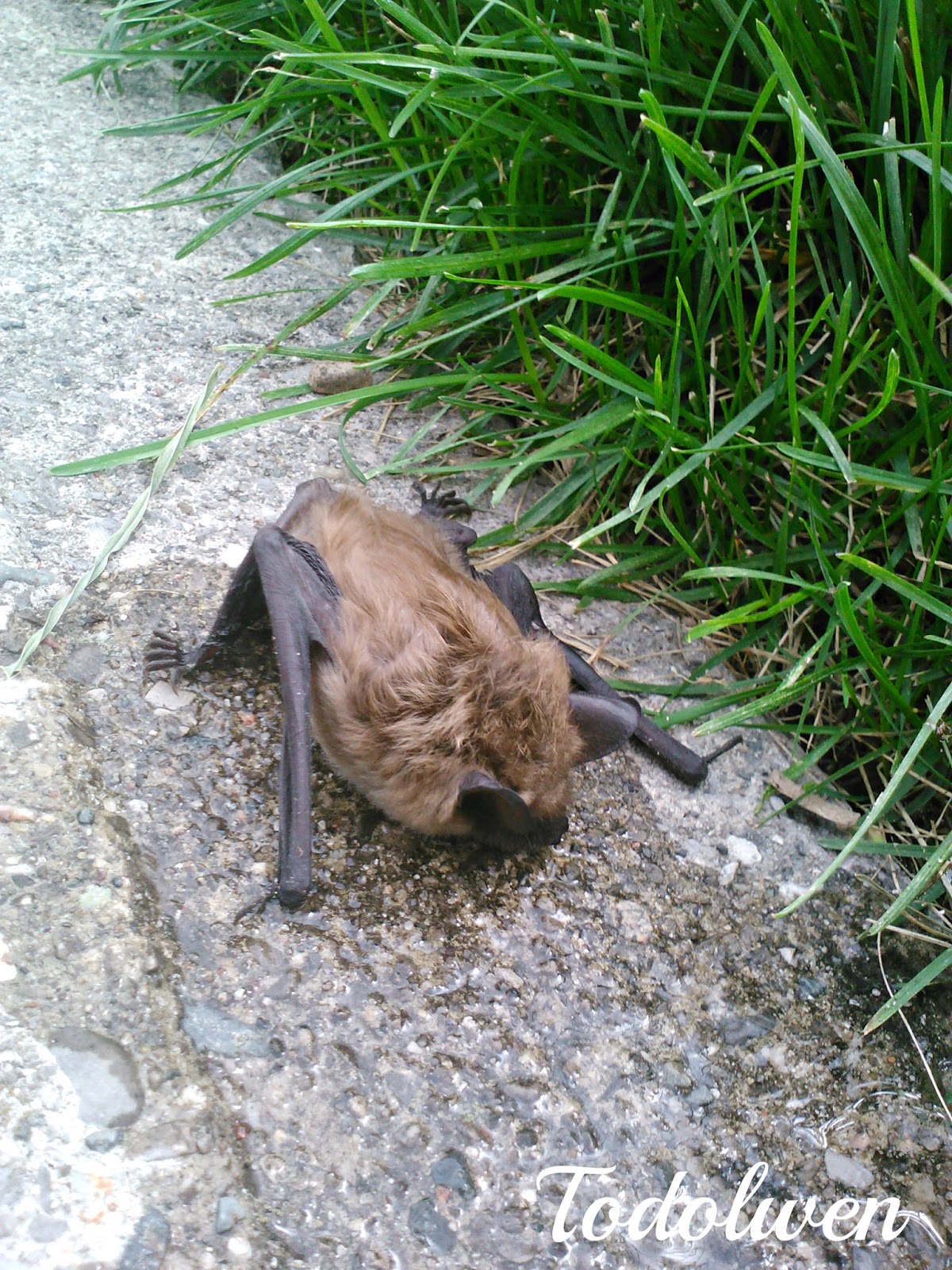 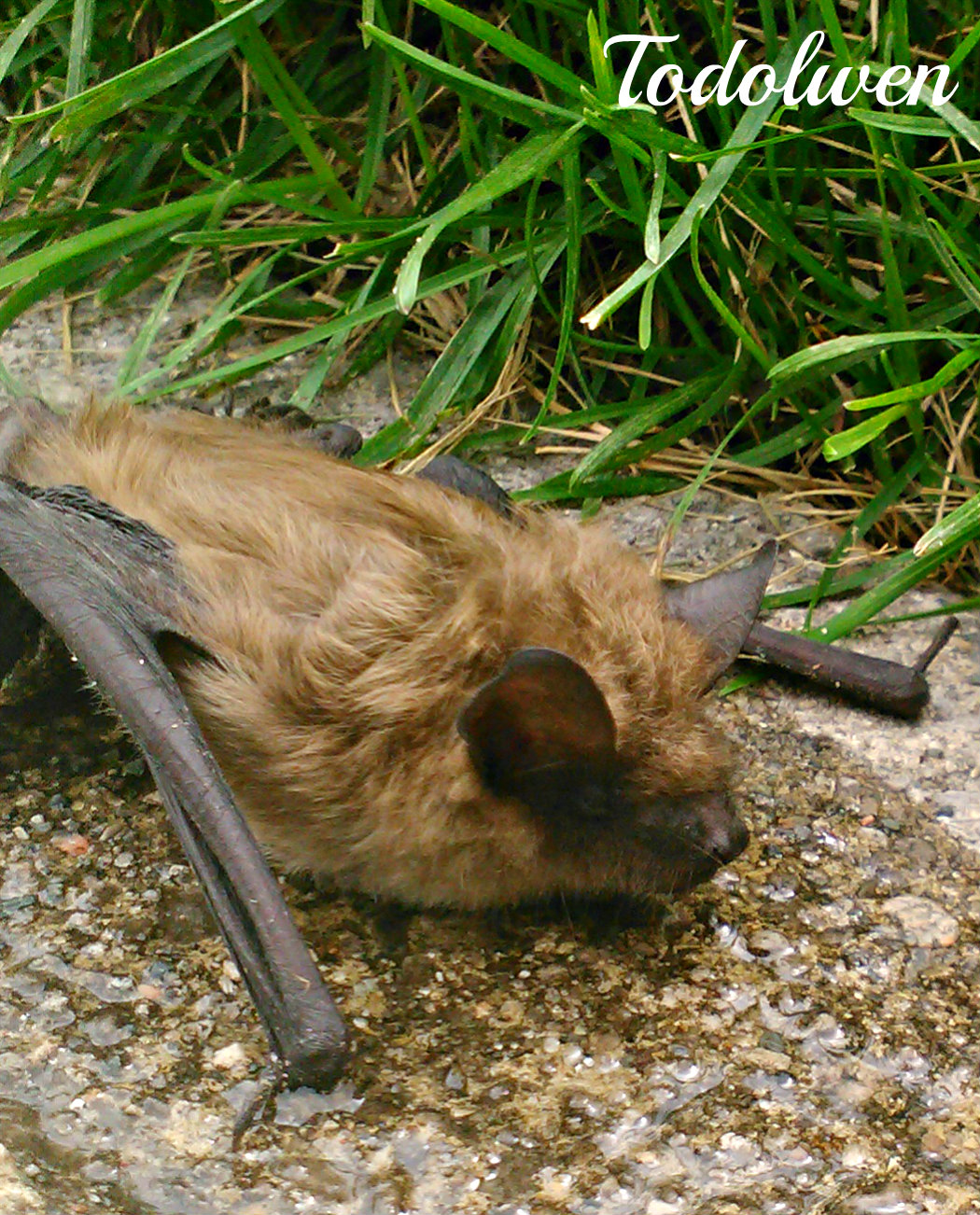 Isn't this a cutie?!


I put a little water onto the ground right in front of him and suddenly he began to drink ... and drink and drink. Five more times I gave him a little more water and he just didn't seem to want to stop drinking it and I was so glad about it. He also became a little more active too because when I tried to pick him up and place him in the box, he tried to crawl away. But he did end up in the box and on his way with us to the Wildlife Rescue Center.
On our arrival, we walked into the building and told they receptionist why we had come. We were told that they would have to have an 'animal technician' look at the bat first. A young woman was called and after hearing it was about a bat her reply was: "Ew, ew, ew!" (in disgust) "Because of bats, we have rabies!" (I know she had a point but other animals like rats, foxes, squirrels and raccoons can carry the virus too.) She continued to tell us that she needed to know where we found the animal, my contact information and that we would have to sign the animal over to her. She would then call the health office and after that euthanize the little critter! Now that isn't what I was told on the phone! Where had the part of trying to release the animal if it turned out to be OK, gone? Suddenly her whole attitude towards us changed. My younger daughter was now angry and had left the room. And I decided to follow her. I pick up my box with the little brown biter and left as well. I was very angry to have been given deceiving information about what was going to happen to the bat.


On our way home we had to drive past one the city's main rivers and we remembered a parking lot where we have fed geese a few winters ago, and that is where we headed to. We stopped next to a larger old maple tree and I carefully placed the box next to it. As I slowly opened the lid, the little brown bat looked up at me and then started to climb out of the box and up the tree trunk. As he got just over a foot high, he turned himself up side down. Still a little shaky from the whole experience, he caught himself a bug that was next to him. After that he pulled his wings over his head and fell asleep. We happily left him there and headed back home. 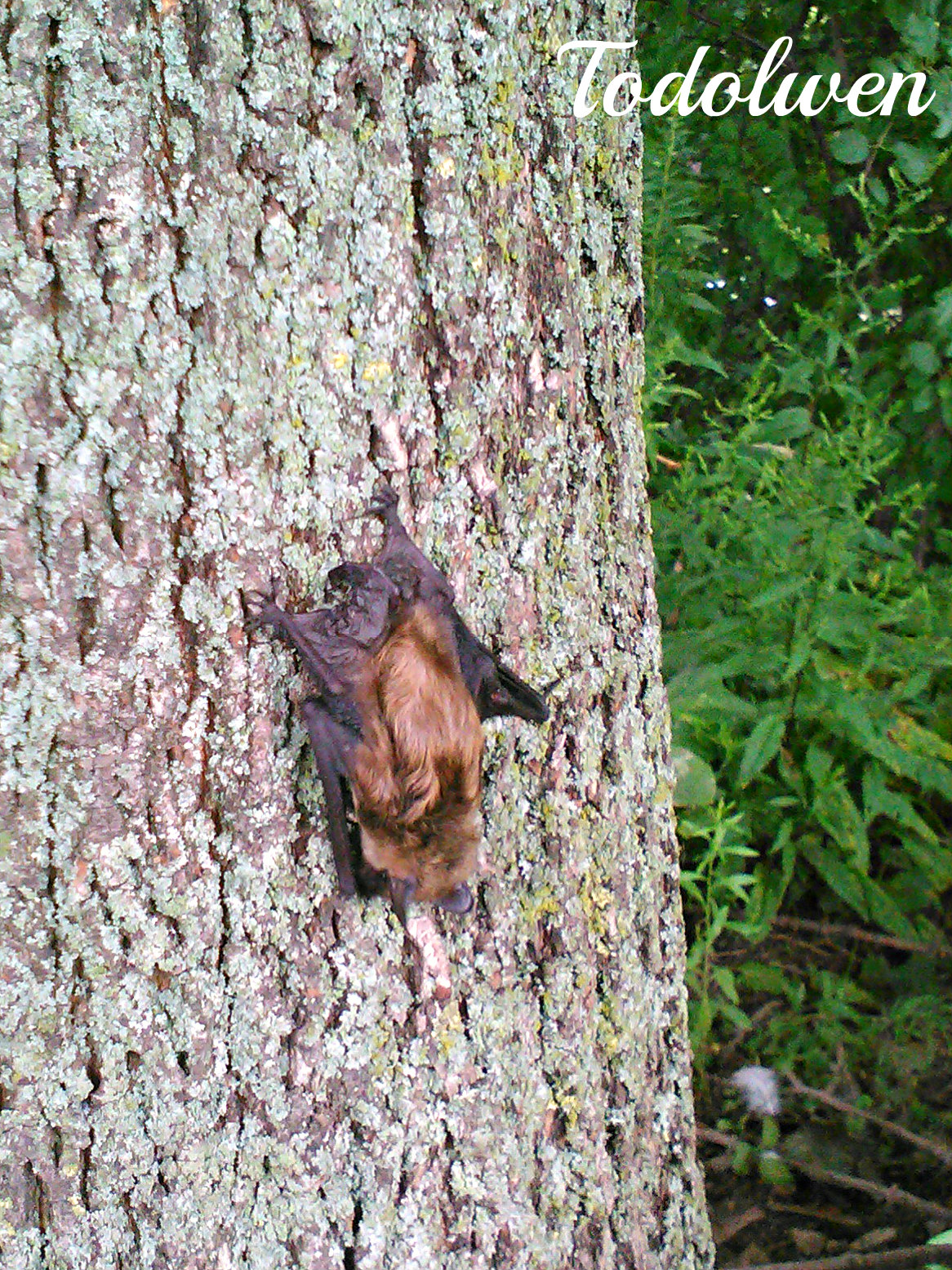 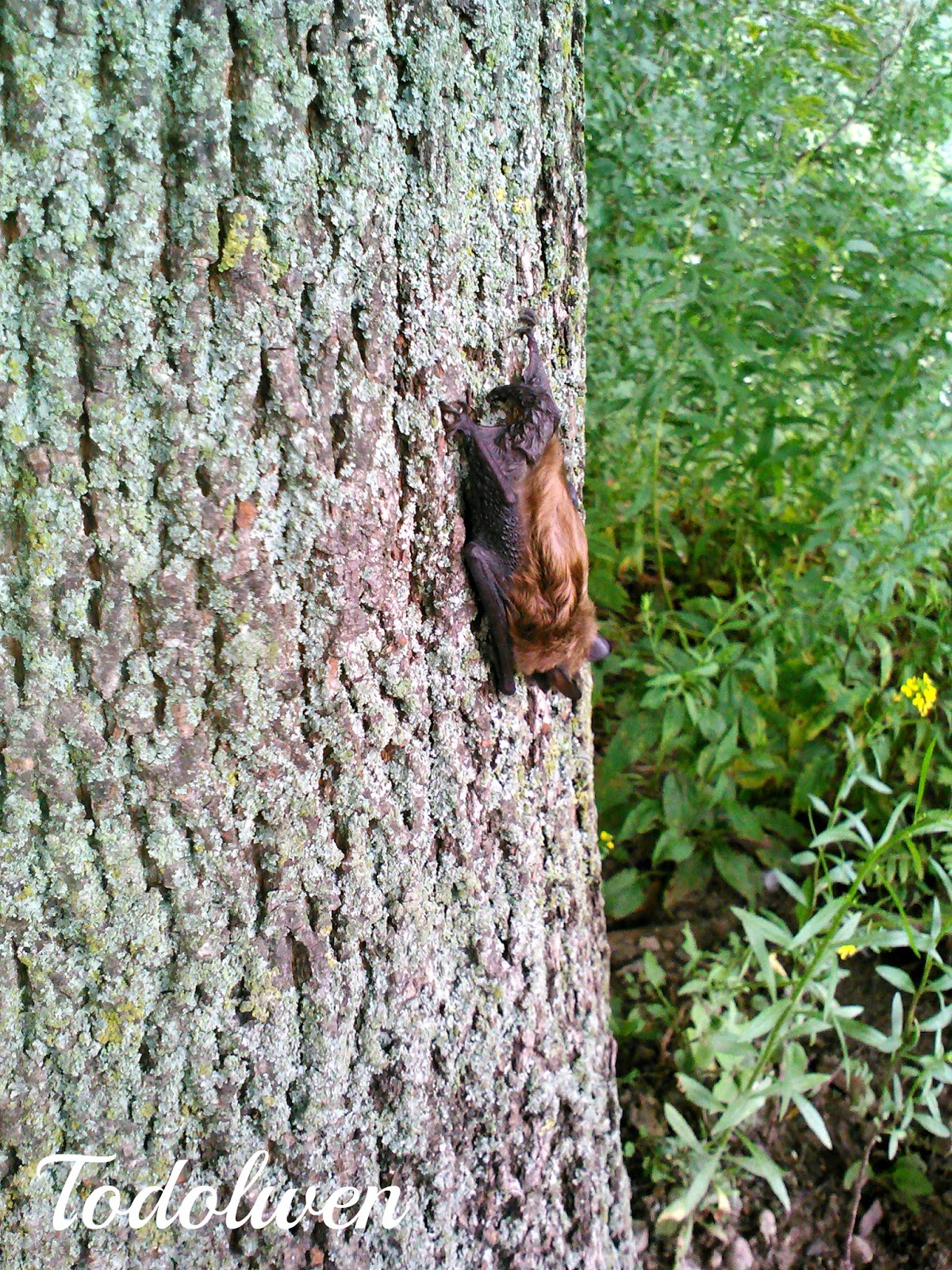 Now it was up to Nature if this little creature would survive or not. I know, I did my best with my daughter Caylagh's help to give a little helping hand to save it.


Is that the end of this story? ... No, not quite yet. Come later today, I am going to call the wildlife rescue center and speak to who ever is in charge to make a complaint about what happened.
I hope you don't mind that I shared this story with all you lovely bloggers but it was important to me. Many people out there go out of their way to help animals and others that are meant to do so, don't even stop and think and do then the wrong thing.
I hope you are well my dear friends and life is treating you kind.

Have a peaceful and creative day.
Posted by Karen B. at 12:29 AM