An Old Beauty With A New Look And A Little Secret ..


I have always loved to create and I have always love old things too.
The only thing that would change is the style and look I would like. When we lived in the England I started to collect old pewter and tin coffee and tea pots. Some of them just to look at and some of them I turned into lamps.


I had been sorting through cupboards and boxes, saying good-bye to many unneeded things and just making space and feeling very good about it recently and whilst de-cluttering I came across some of my old teapots again and I knew right away that they were not going to leave the house but be recreated for me to use again.

I had bought all of them when I was into the primitive style where black was 'the' color and therefor painted them all black! Back then it was what I liked but now I am literally kicking myself for doing so. All that beautiful patina and age now covered in black spray paint. Such a bad idea really! 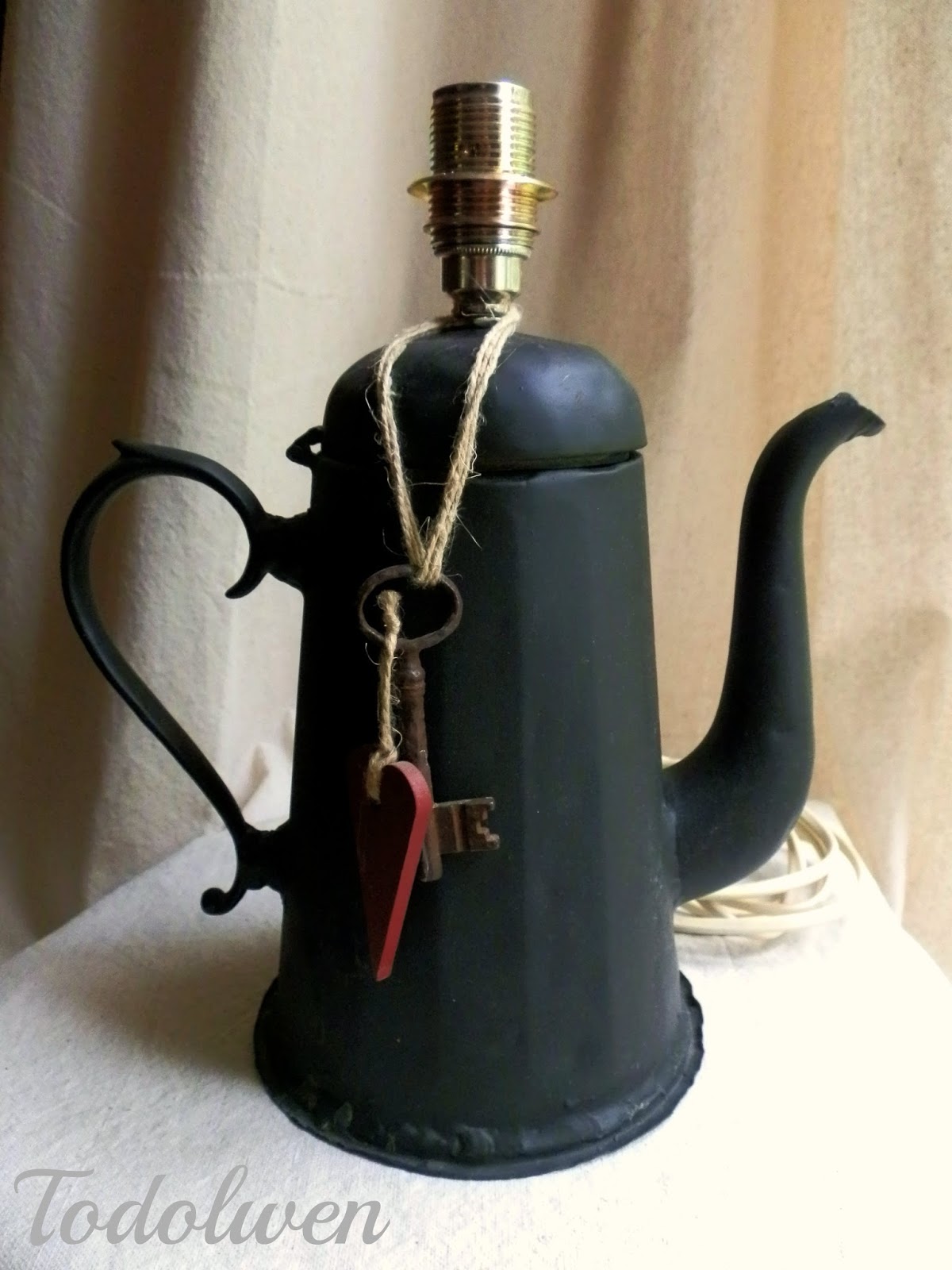 This is actually my first coffee pot I bought many years ago in the Netherlands at an amazing indoor flea market in a place called Cuijk. It was a guilder or two and it had been repaired many of times but it was exactly what I wanted. In those days I didn't take any before pictures unfortunately, so I can't show you what it looked like before I spoilt it.
I have kept it as a lamp but I gave it a makeover to a style and look that is more appealing to me these days. The wiring needed to be changed because it was European and it wouldn't work here in Canada properly and the painted wooden heart had to go as well but I kept the antique key. I was now left with a 'blank canvas' to work with. A visit to Home Depot and Michaels and I had some of the supplies I needed. Everything else I was able to find in one of my boxes or drawers. The last thing that was needed was a new lampshade. Of course there had to be a hiccup somewhere along the line with this creation. Since I wanted a smaller lampshade the only one I could find that was the right size didn't have the attachment so it could be used with a lamp harp (this lampshade would hold onto the light bulb) but that wasn't something that would make me give up. A pair of wire snips, pliers and a metal washer and the problem was solved.

I am not really good with colors these days, I prefer neutral and soft shades like creams and off-whites, but I decided on a very pale blue shade of paint called 'Wind Speed' from Behr and it looks very nice and almost like a duck egg blue. After a coat of primer, two coats of the blue shade followed. Once that was finally dry I 'dressed' the pot with a coat of  'One Step Crackle' which I love using and is a favourite of mine. I wanted to give the illusion of old cracked glaze just like you would find on an antique piece of old crockery. To make this happen, I covered the entire pot with a water based stain and wipe all the excess quickly off again. That is when the lovely aged and used look slowly appeared and  that was exactly what I was looking for.

The hardware and wiring was quickly done and then it was time to turn my attention to the lampshade. I had purchased a very plain light beige lampshade because I wanted to be able to work with it without over decorating the entire look of the lamp. I had wanted to use a piece of old lace curtain at the antique store just recently but that turned out to be the wrong piece. Luckily I didn't cut it up too intense so I will still be able to use it in a different project. In the end I chose to recover the lamp shade with a fabric called Osnaburg. I must say, I was slightly worried because I had never recovered a lampshade this way before and so I am happy that it did and that perfectly too. All that was needed now was a few special pieces to embellish the lamp with and I was done and very happy with the result too. 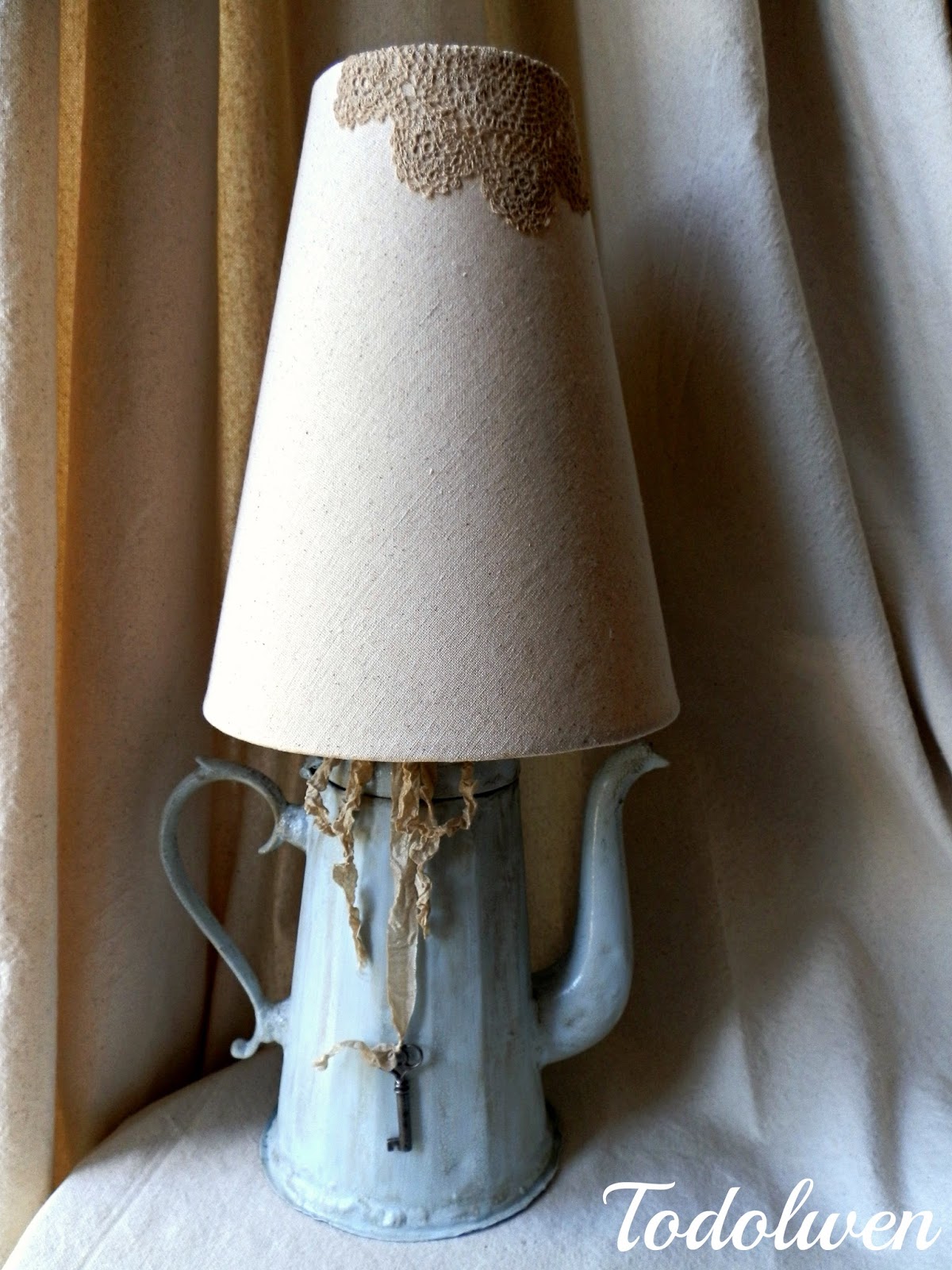 I love the look I have given my old coffee pot but this is not the best part of this creation. 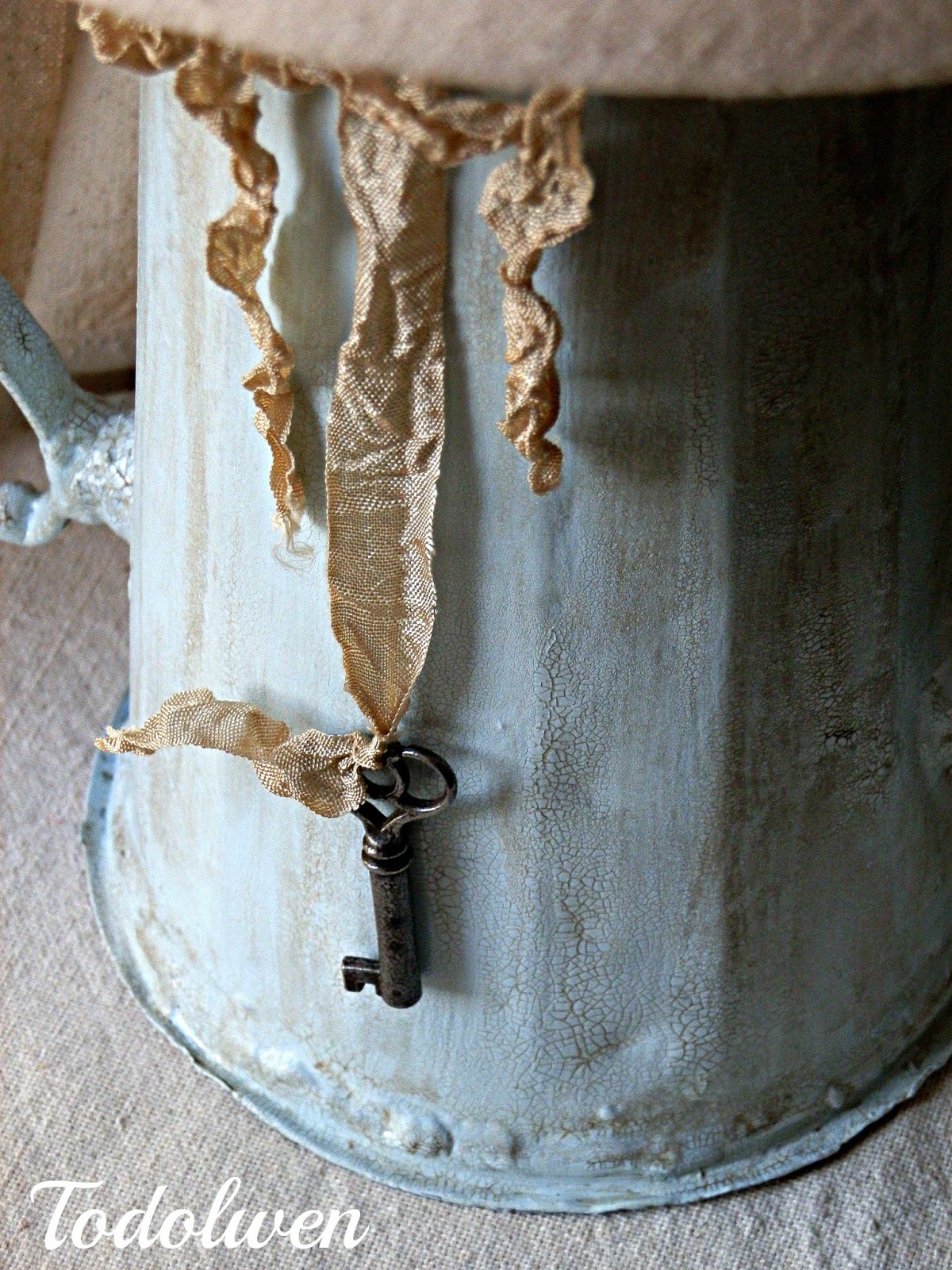 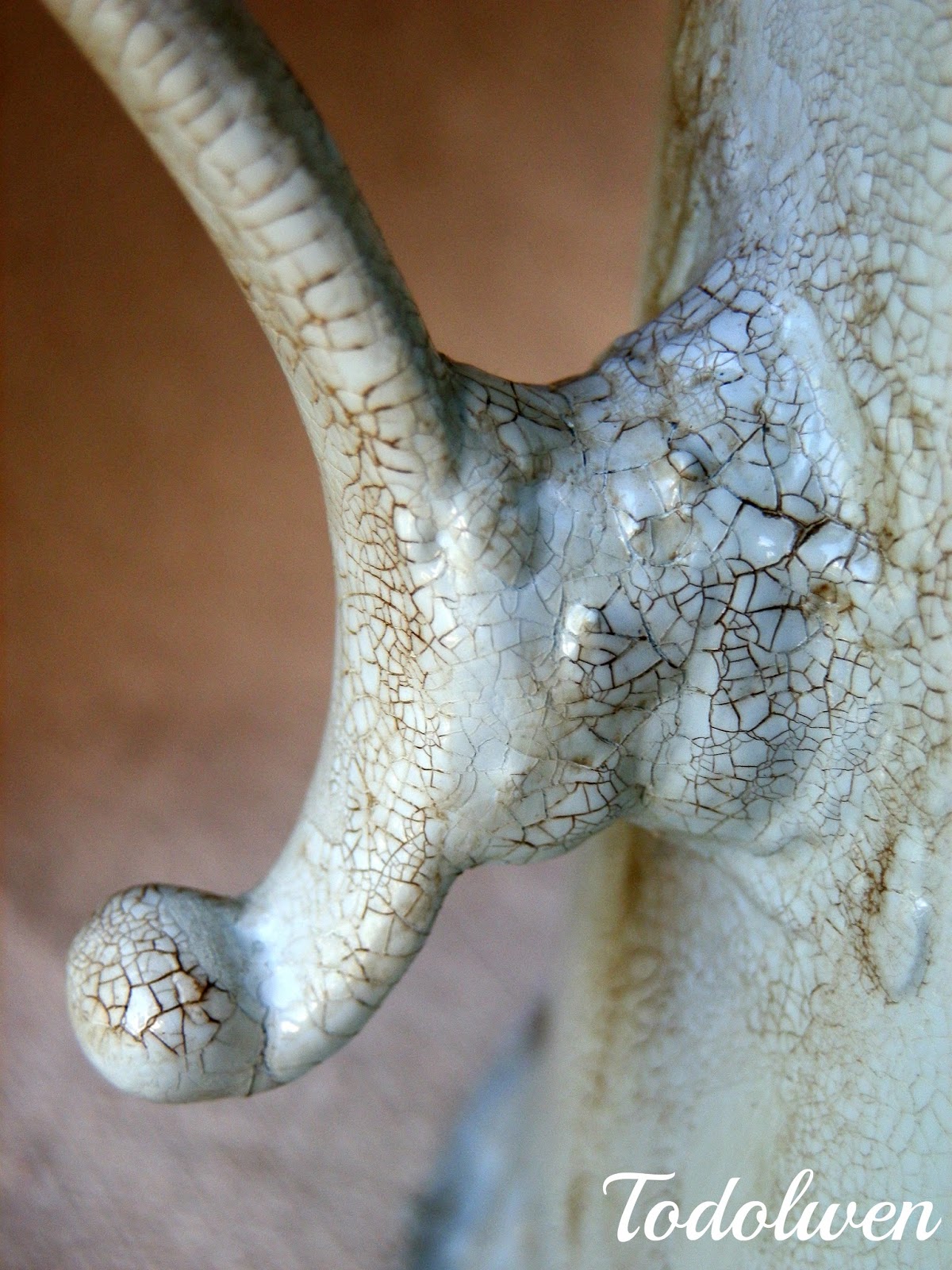 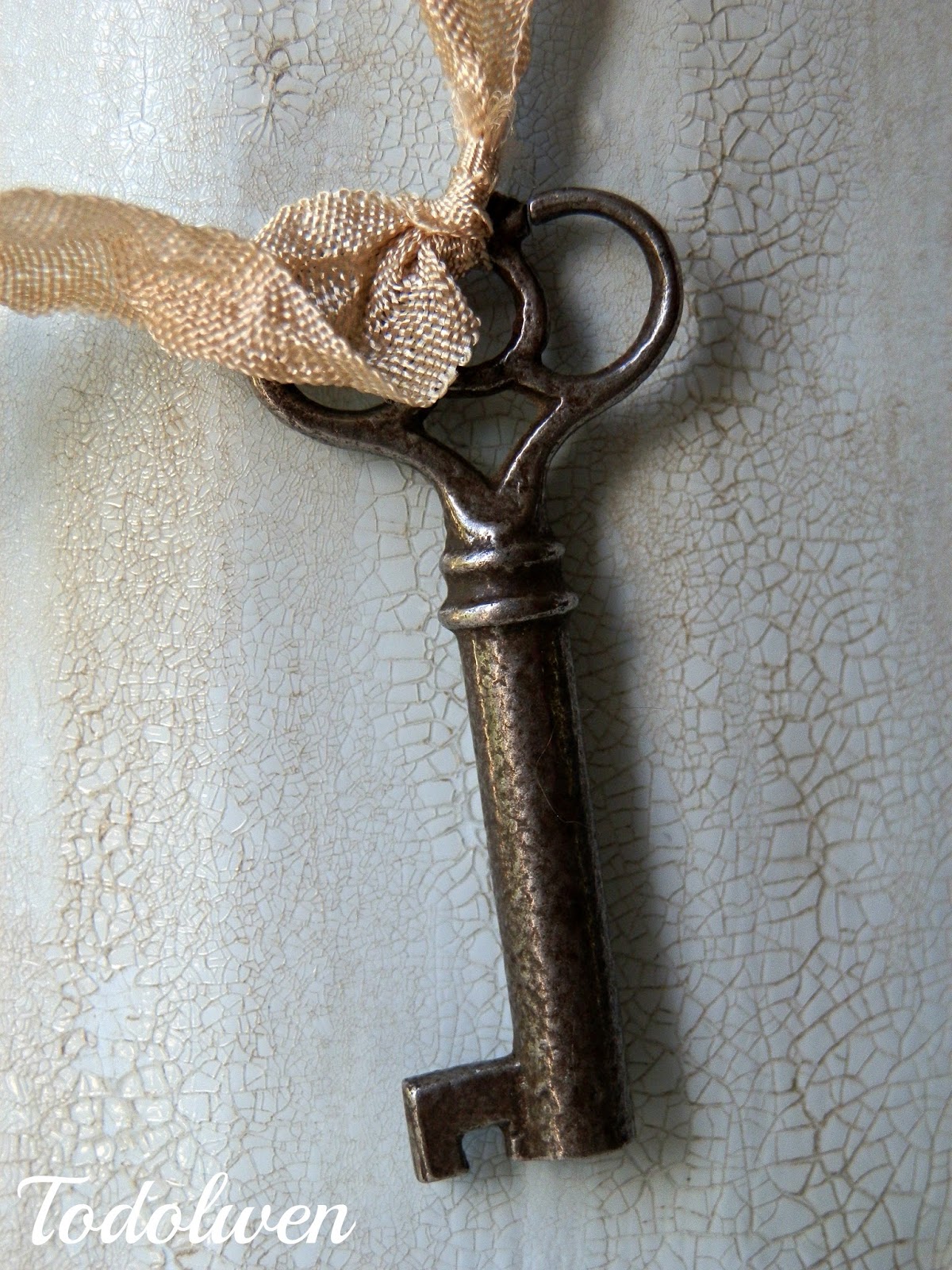 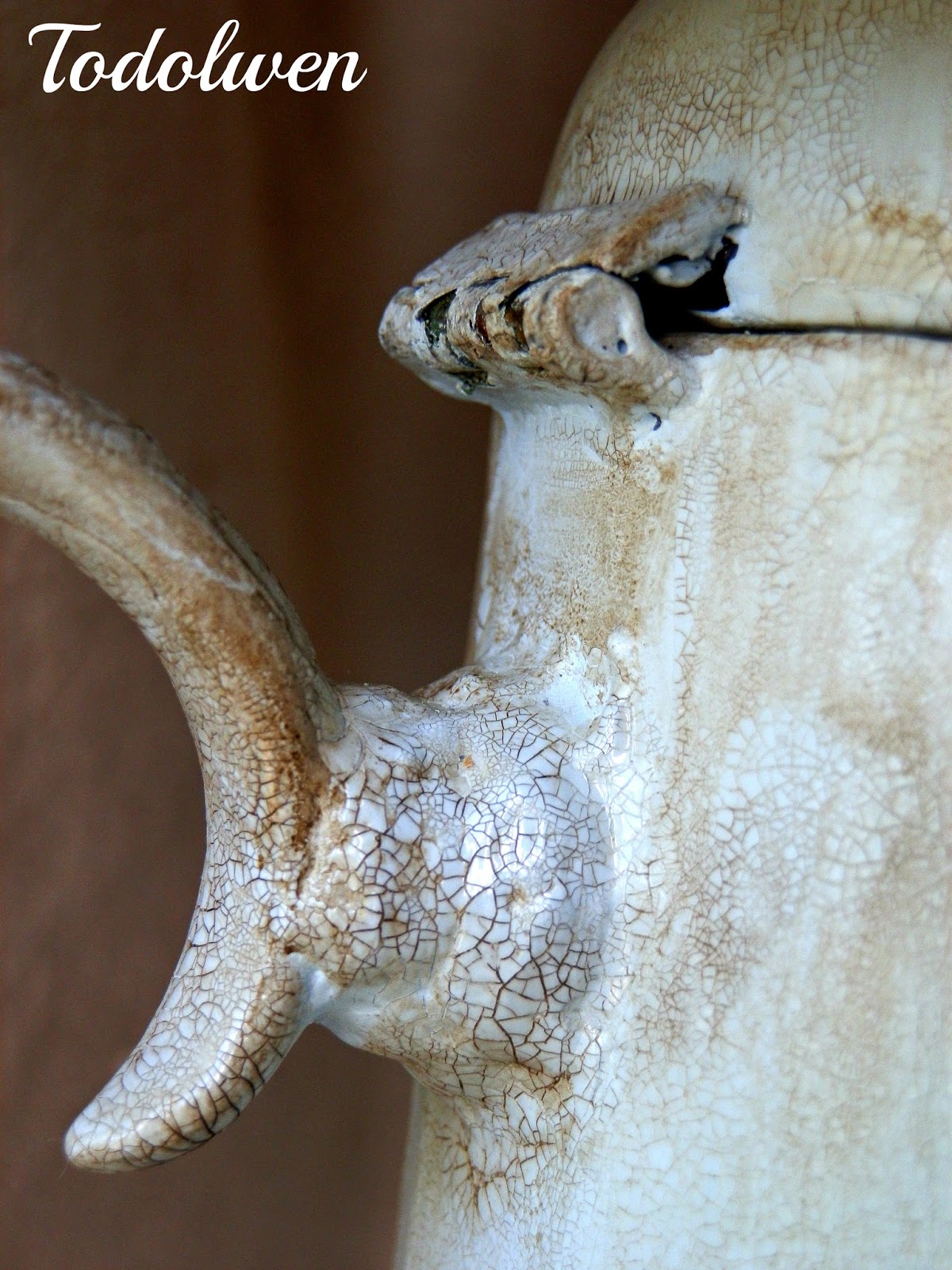 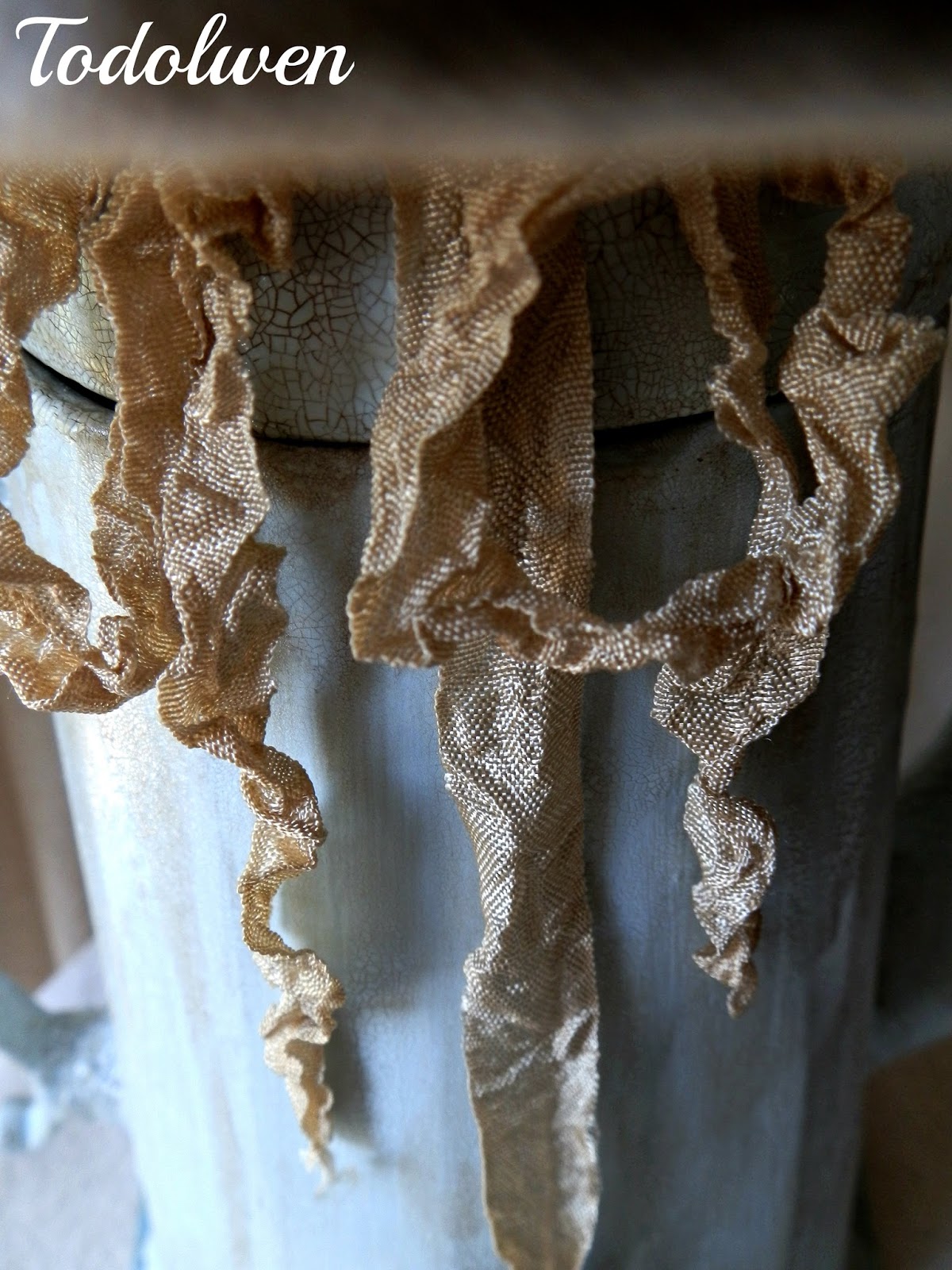 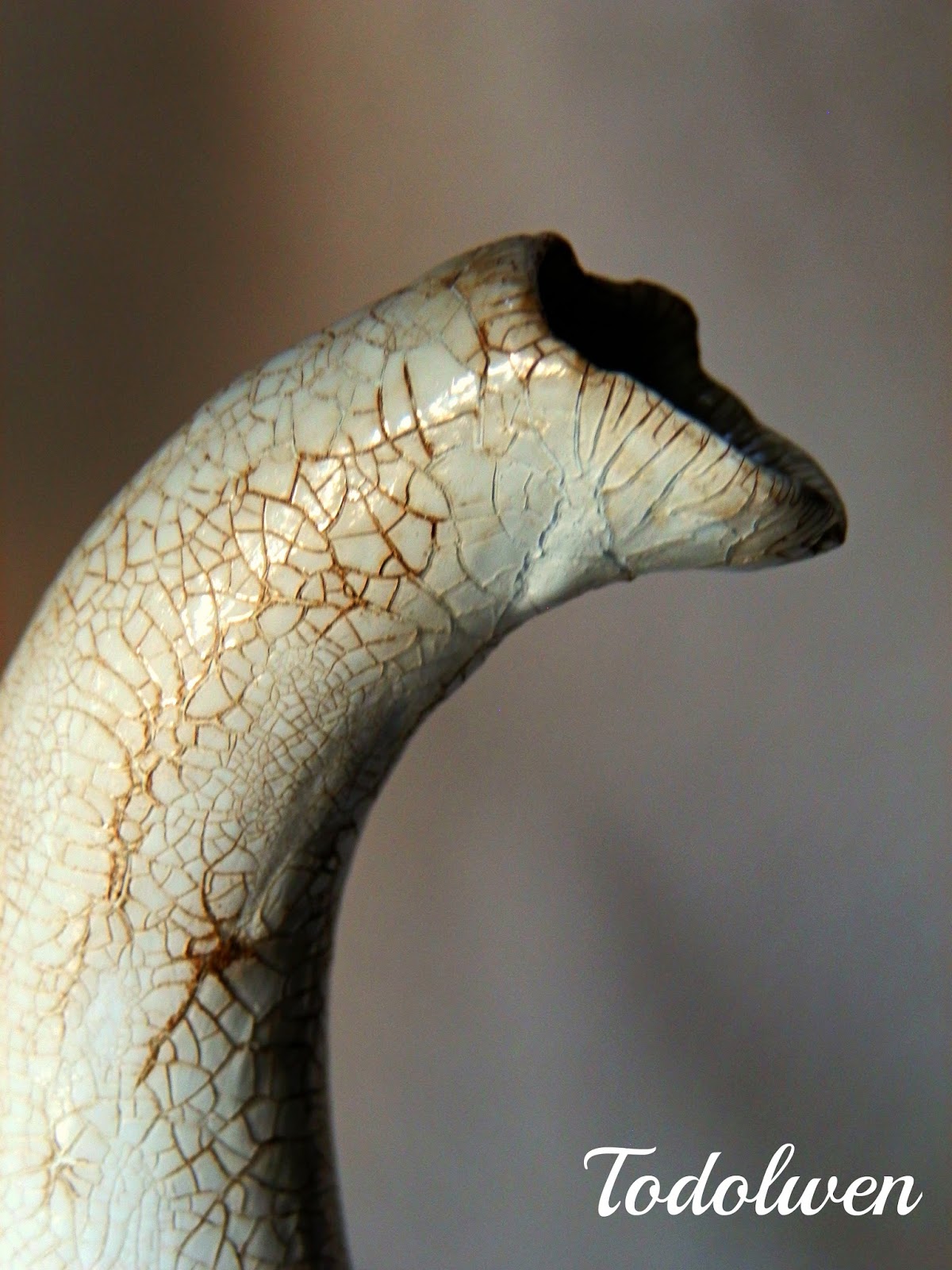 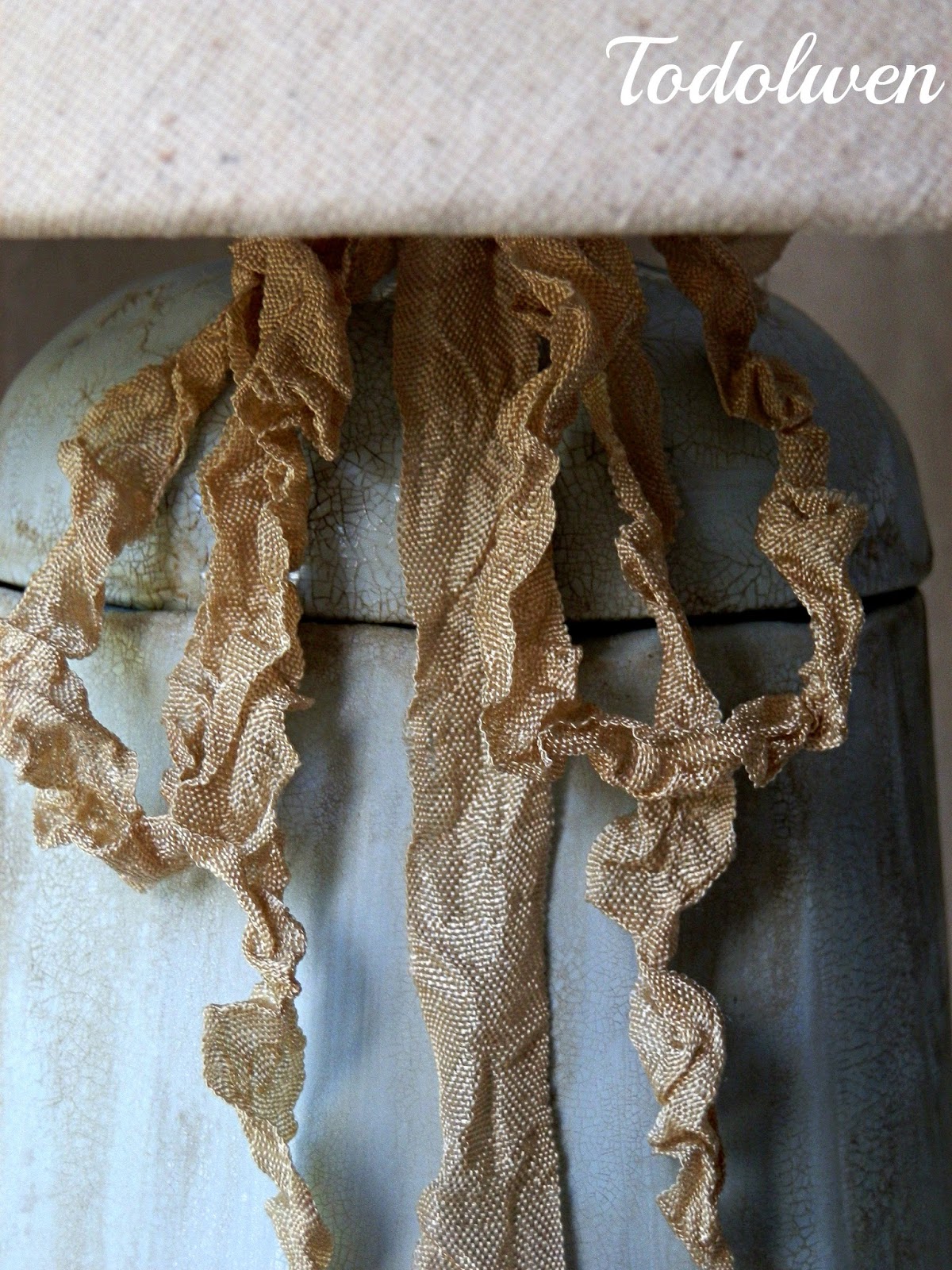 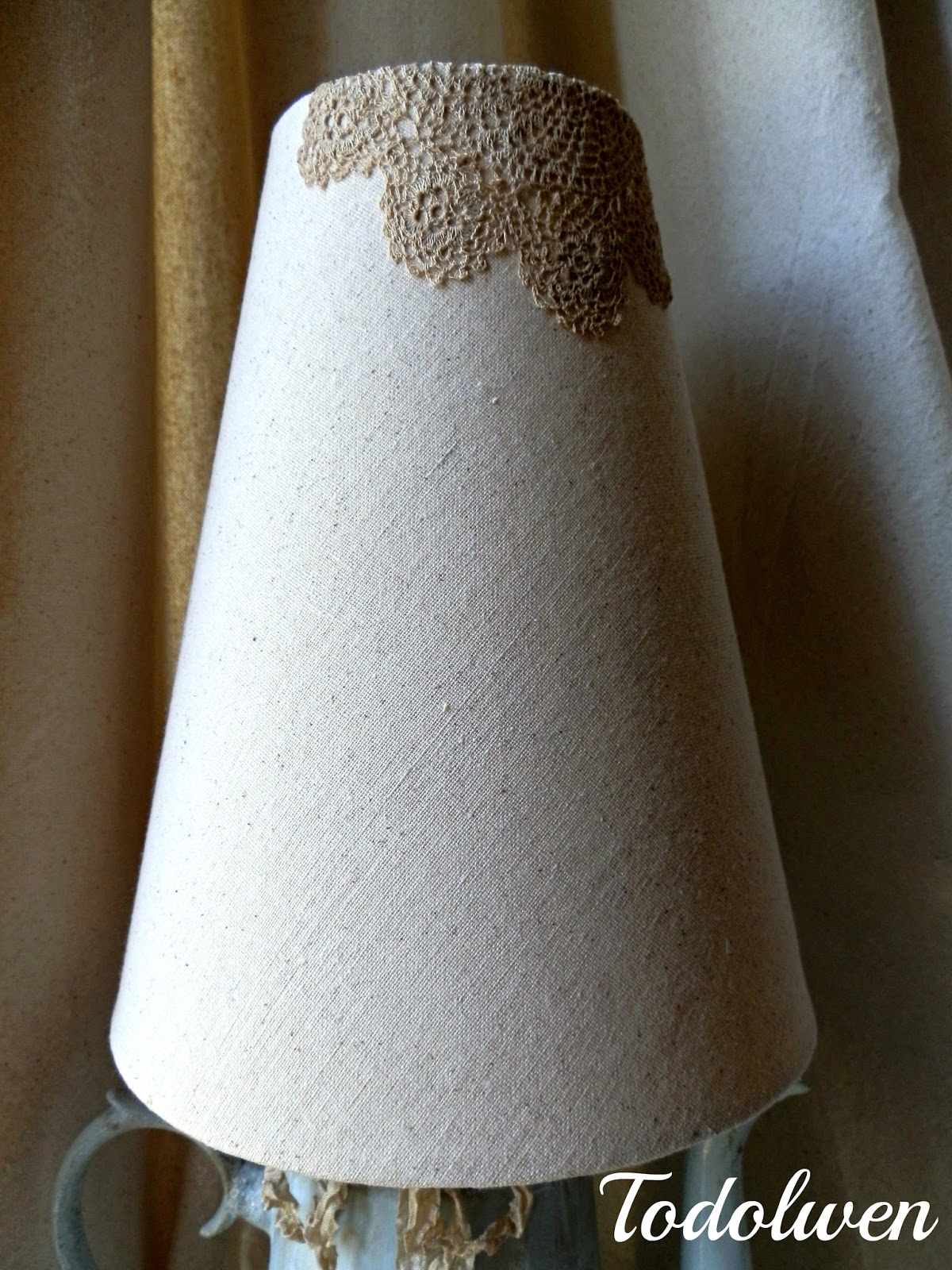 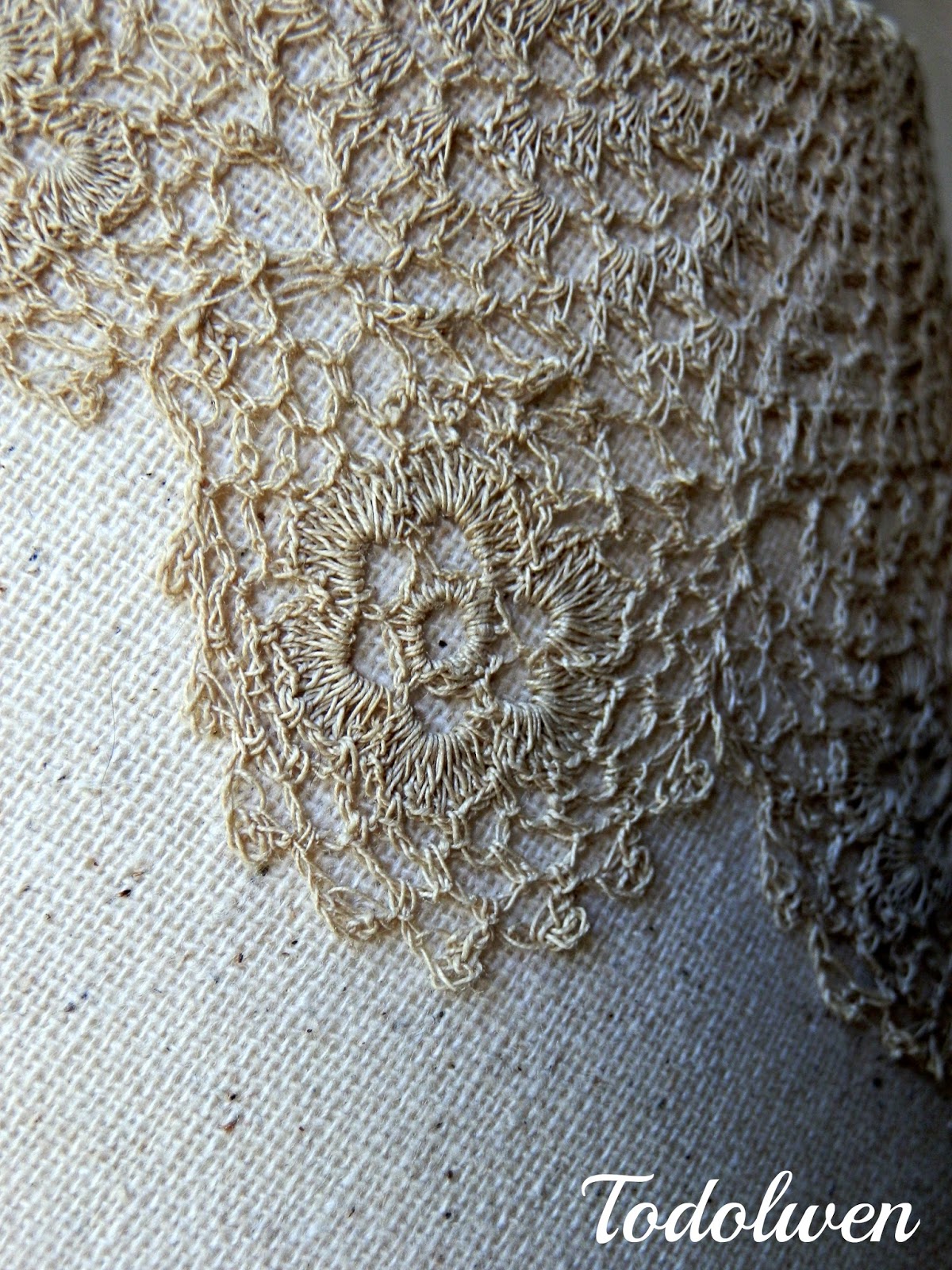 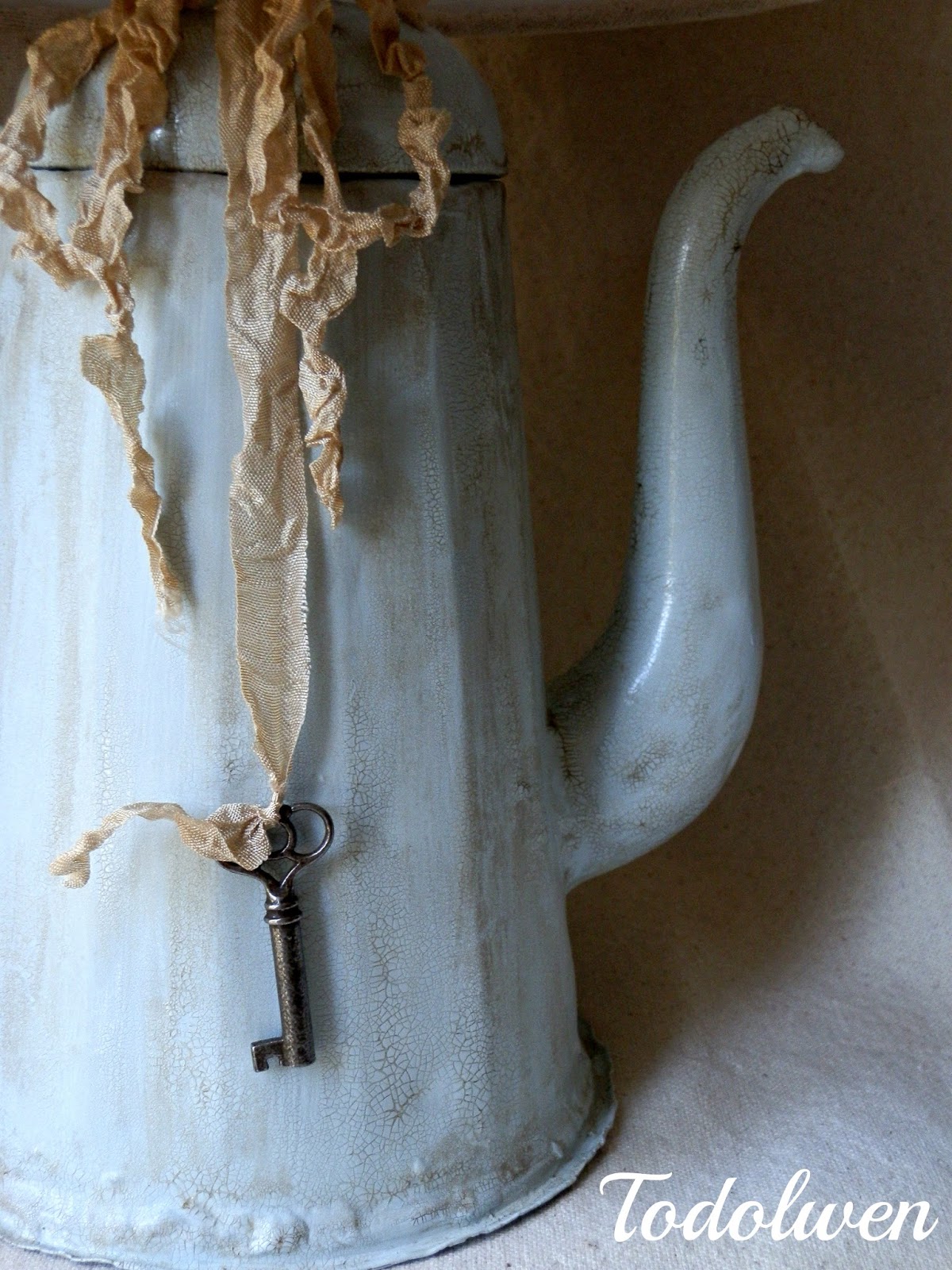 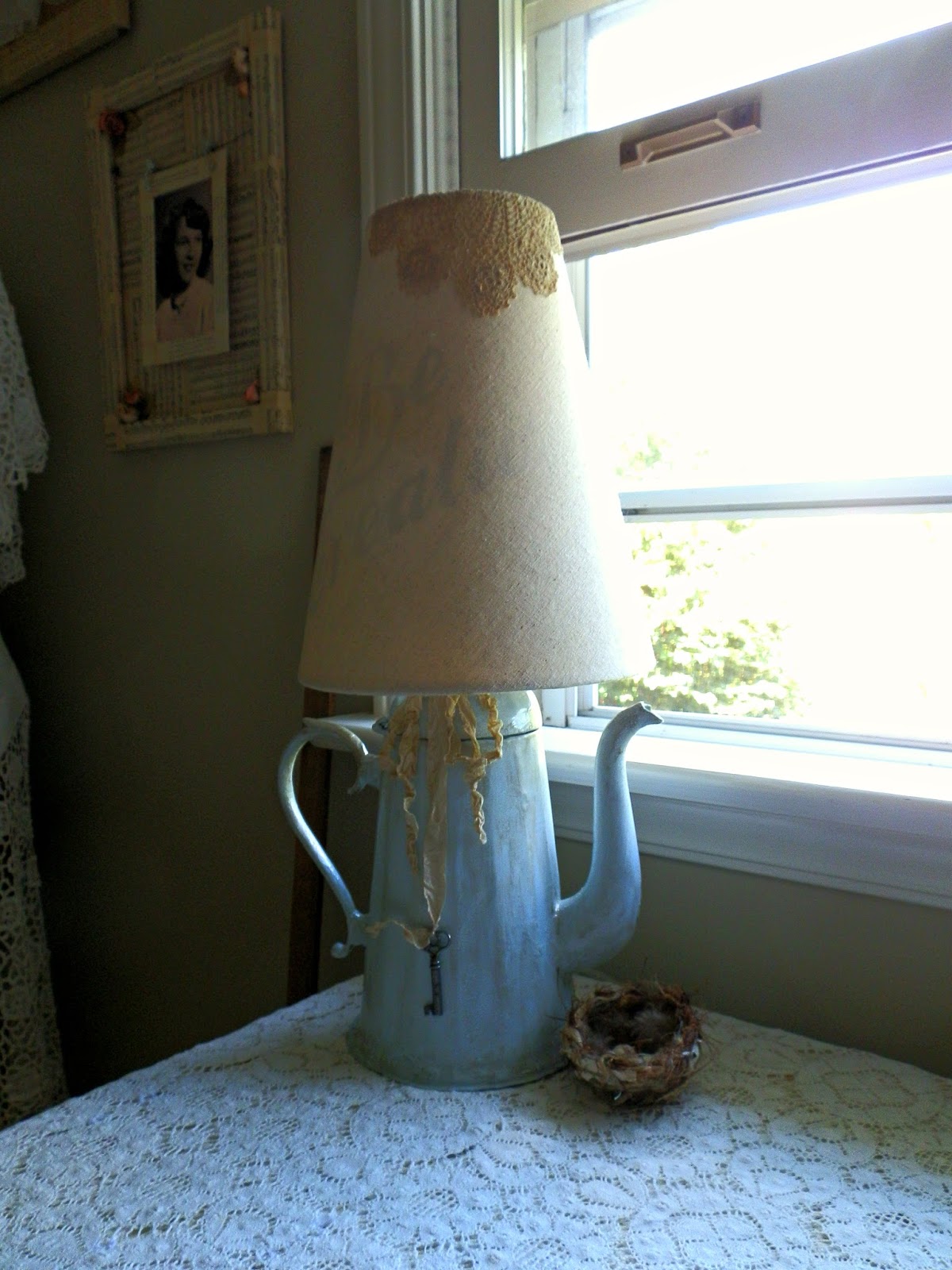 It's new home is on the table next to the window in my creative place and ... 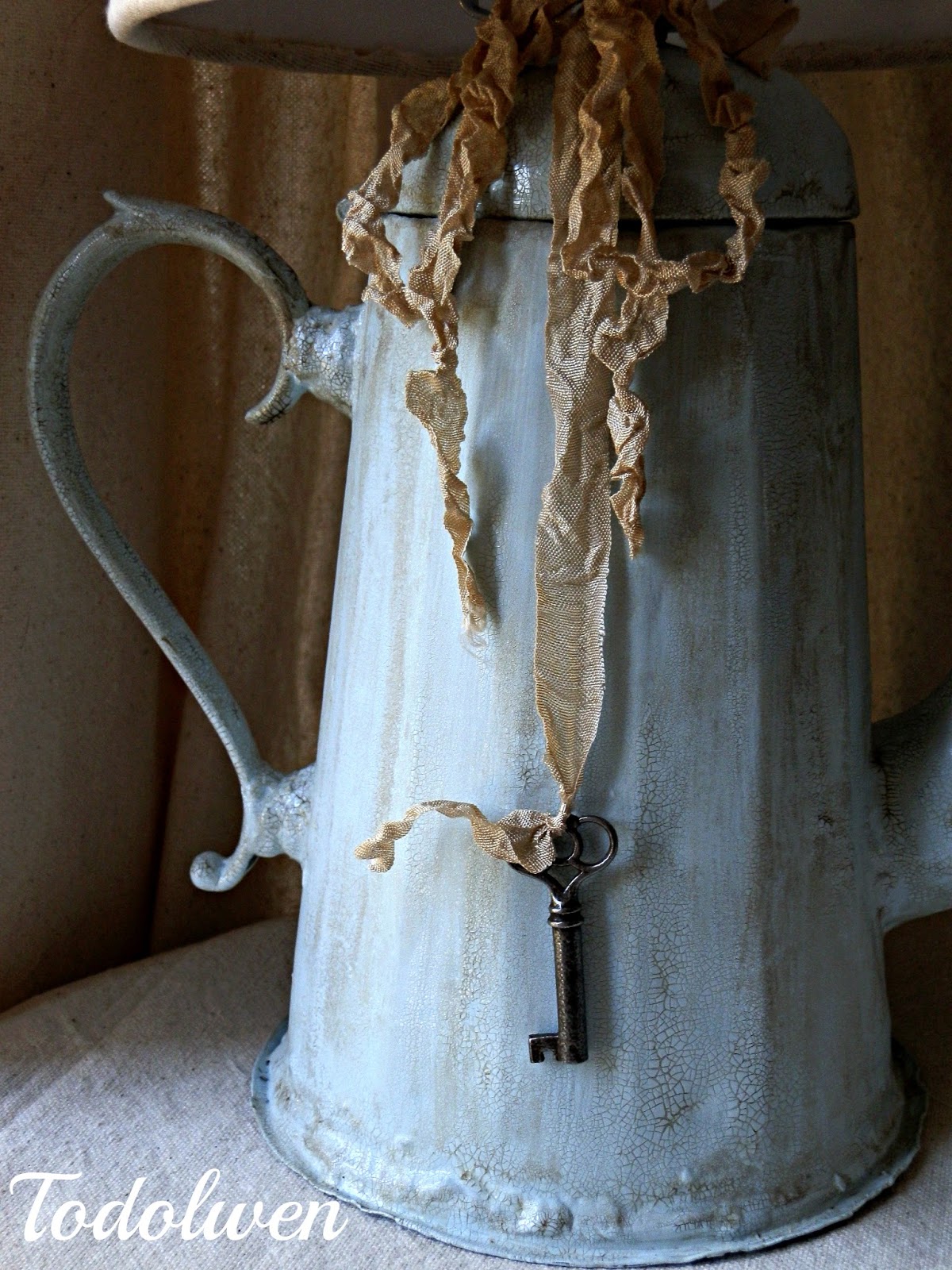 ... once it becomes dark outside and you pull on the little key to turn the lamp on, the light then reveals the lamp's little secret! 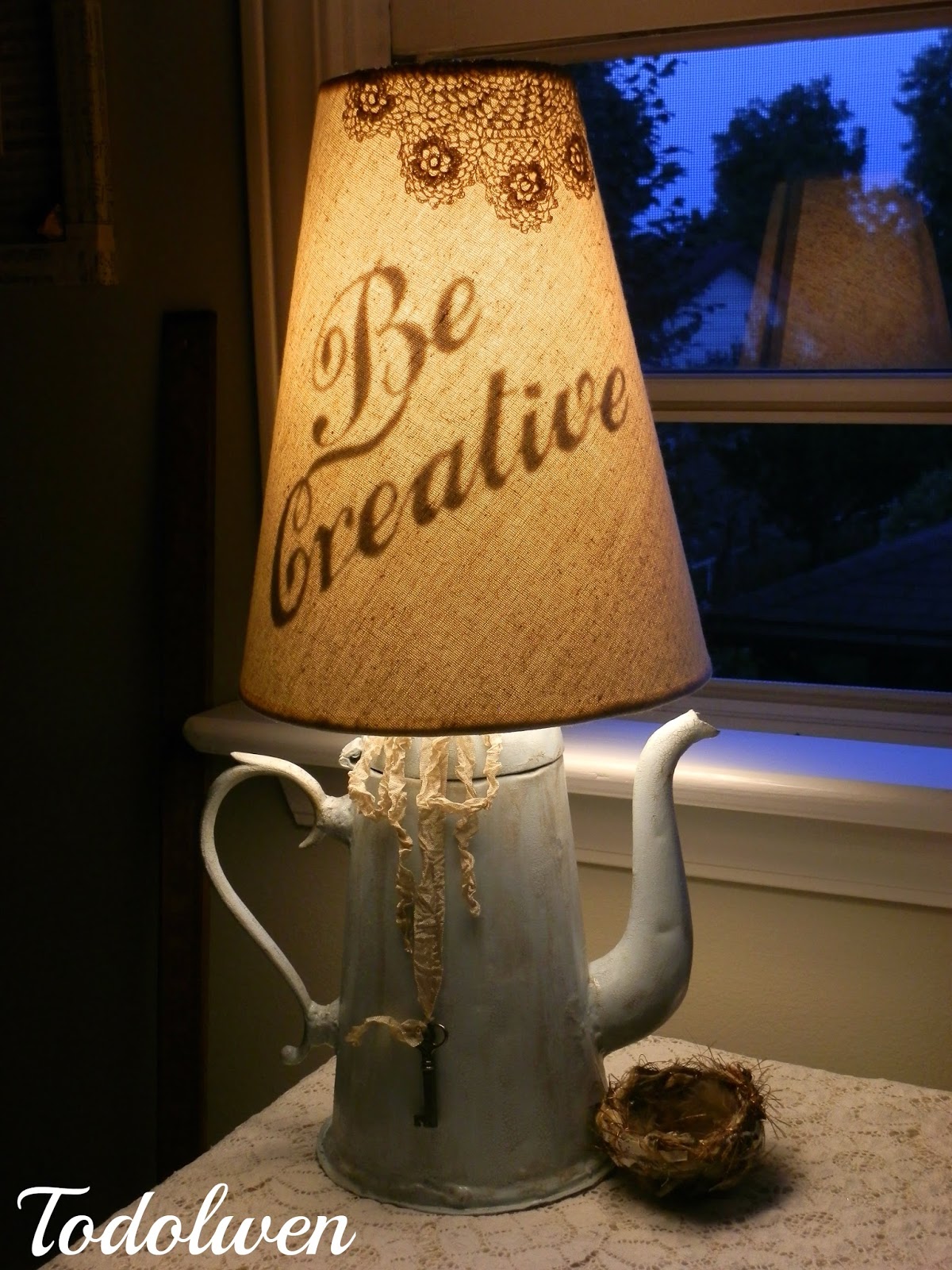 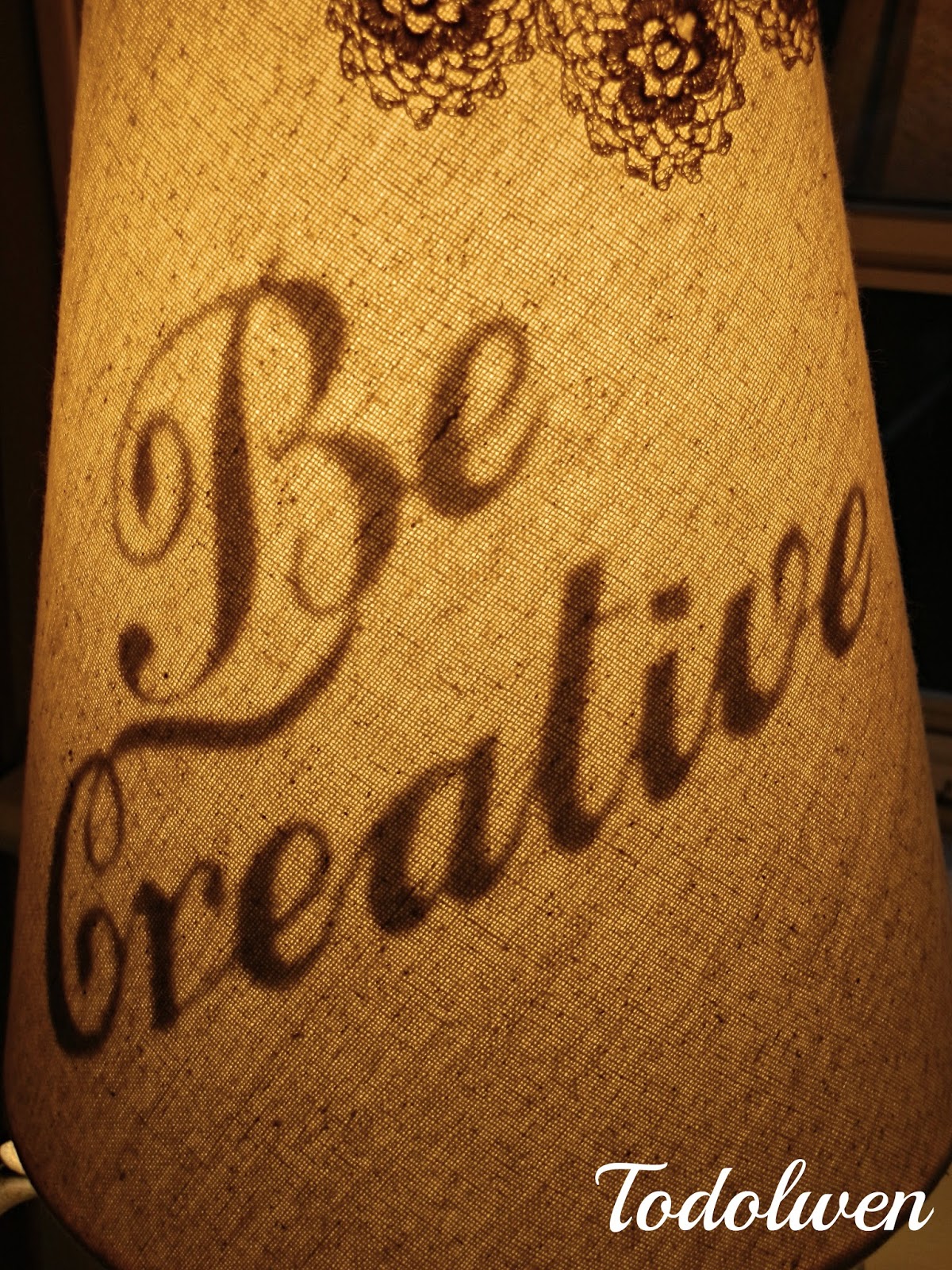 ... a hidden message!
It took me several attempts and hours to get the writing cut out neatly using tiny scissors and without ripping it. I also had to make sure it wasn't too visible through the shade at day time but in the end it all came together just lovely.
I hope you have enjoyed my latest creation?! It took me some time to make it but I enjoyed every minute of it.
Thank you for stopping by and visiting me here at Todolwen again.
I hope you are well my dear friends and life is treating you kind.
Have a peaceful and creative day.