A Specail Memory As An Army Wife

today I would like to share a special memory from my days as an army wife. My husband served in the British army for 24 years since he was 16 years old, in which time he served in Bosnia, Northern Ireland and the Falkland Islands and he was also called out to the first Gulf war (to which he didn't have to go in the end) where there was always the possibility of him not returning but thankfully he always did come back home!

One morning which seemed to be a normal everyday morning, close to the end of his military career, we received very special mail. 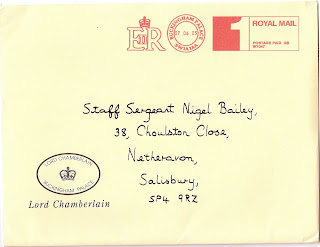 I looked at the envelope and my first thought was that somebody was playing a joke on us. Asking my neighbor Dave to take a look, he told me that the letter was real!! I was speechless, well almost because I have never called my husband so fast at work to tell him about it.
The letter we received in the mail was none other than ...
... an invitation from the Queen to join her at Buckingham Palace with other military members and their wives for tea!!!!!!!  Can you believe it?!! It took me some time. I didn't even know that you could be invited to Buckingham Palace but I was told that every year the Queen invites military personnel and their wives and civilians to have tea in her gardens.
And this is the invitation! 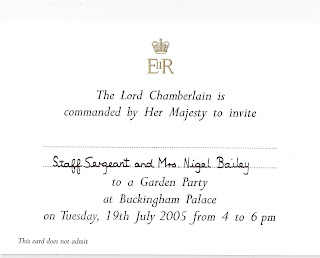 I bought a new dress ~ it was black with red roses ~ and shoes, and all I was just missing a new hat but then unfortunately we decided not to go due to all the bomb threats and the recent bombing in the city of London which killed several people. It was very sad in more than one way. It was a once in a lifetime thing to receive an opportunity like this but the thought that something could happen and my children being possibly without parents was too much for me. I was broken hearted for a while, but I knew it was the right thing to do.

We are renovating our basement this year and my husband is going to have a new office built. Once finished I will have the invitation framed and I will hang it in there for us to remember the day we were being asked to have tea with the Queen of England.

I hope you are all well and happy.

Have a peaceful and creative day,