you know when you see something which you can't resist and just have to try it out?!
Well, that is what I recently did. 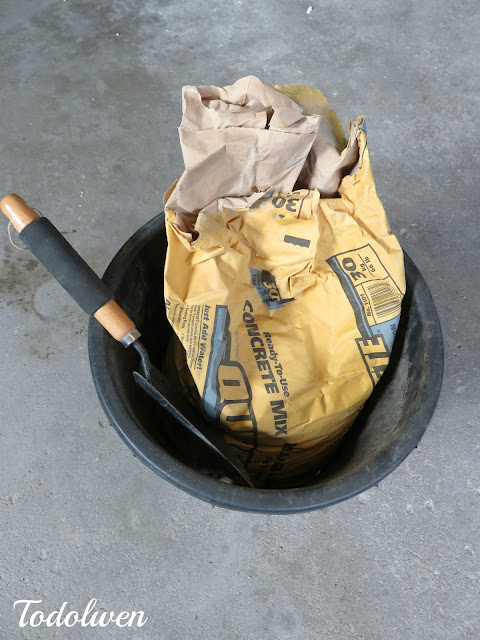 I had seen concrete pumpkins on Pinterest and on other websites since some time now and I had wanted to make one last year Autumn already but never did. I think it was because I couldn't find the plastic pumpkin "buckets" anywhere when I felt like making one. Eventually I did find a few of them but then the "wanting to try it out" feeling had disappeared. That is, until last week.


I feel like that I have become very comfortable with what I create and needed to do something different, so making a concrete pumpkin was the perfect way to go. I thought that we still had half a bag of concrete somewhere hiding in our garage from when our new fence posts had been put it but then quickly remembered that it had gotten wet and had to be thrown away. So a new bag was needed which was no big deal since a 30 kg bag of premixed concrete was under $5. We still had half a bag of small gravel which I also wanted to use. I didn't want my pumpkin to be all smooth and perfect. I also didn't want it to be lightweight so I only use gravel and concrete. The question of what to use for a stalk was not a difficult one to answer. I had some old railway nails sitting in a shelf in our garage, just waiting to be use for something and that was now ... I was all ready to start!


I didn't take any pictures of the actual making of the Autumn fruit because I forgot too and when I realized it, my hands were stuck mixing concrete and no camera was near. But you haven't miss anything really. I just mixed the concrete mix with water and added some more gravel to it (almost too much), filled my pumpkin "bucket" and stuck the railway nail into the center of it and that was it. After that was done, all that was left to do was tidy the mess I had made up and wait.

Three days later and it was time to cut the plastic pumpkin open and into pieces and hopefully pull a neat Autumn fruit from it. 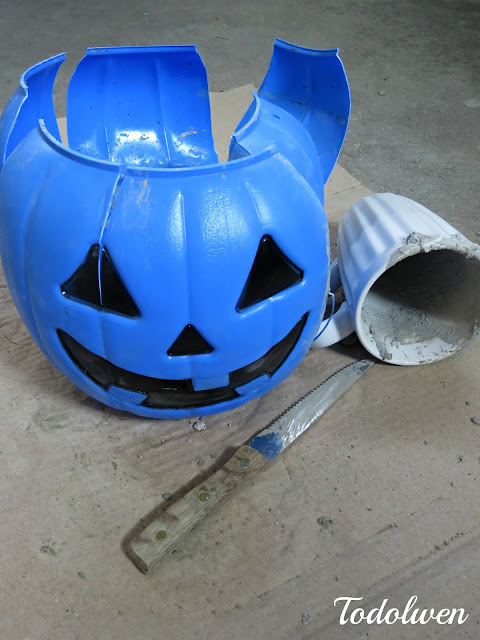 And I did! This is my Autumn fruit aka pumpkin on our front porch now ... 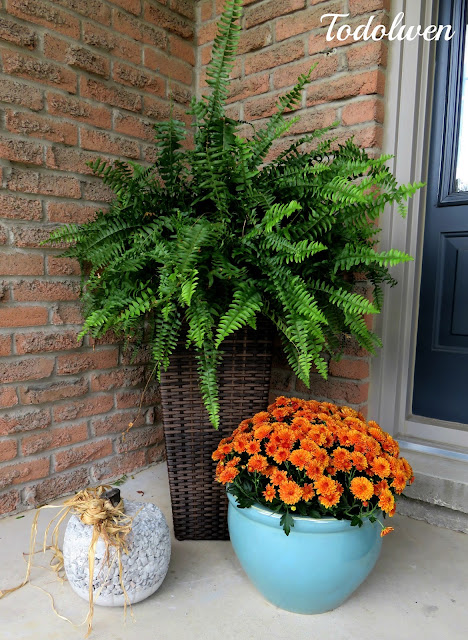 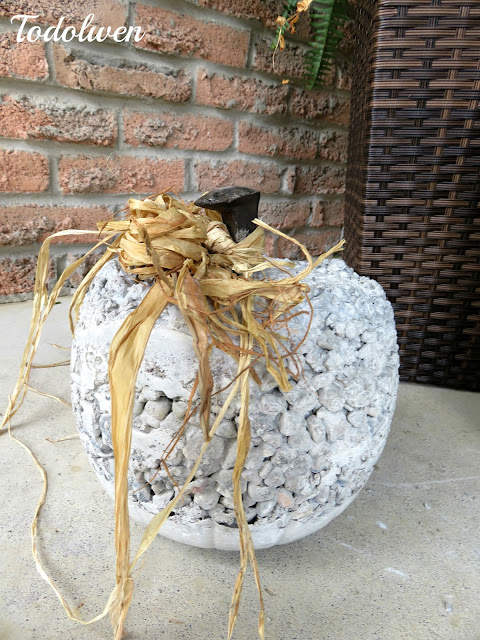 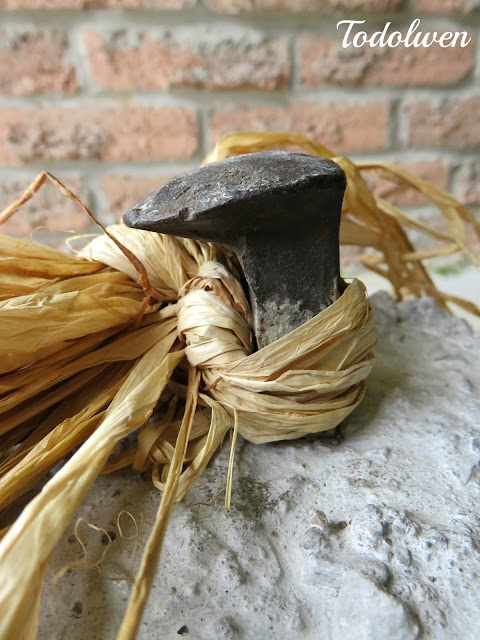 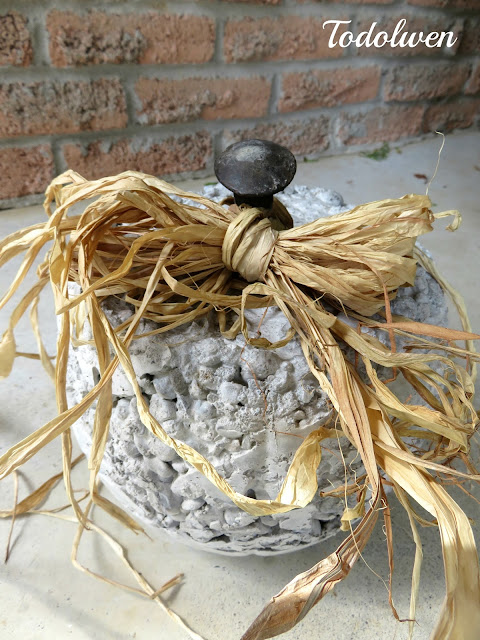 It didn't turn out perfect, weighs a ton but I like it because it is different! 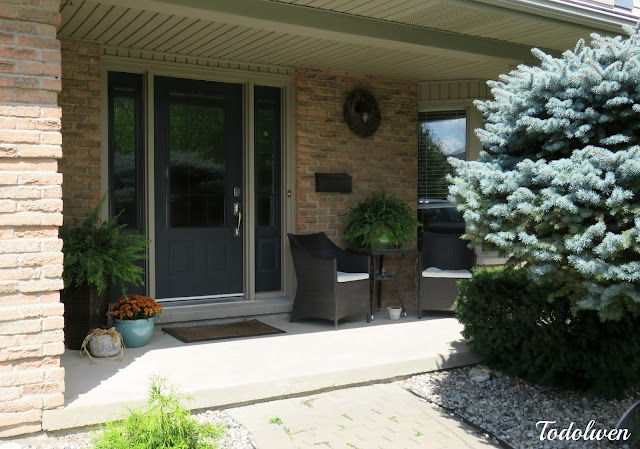 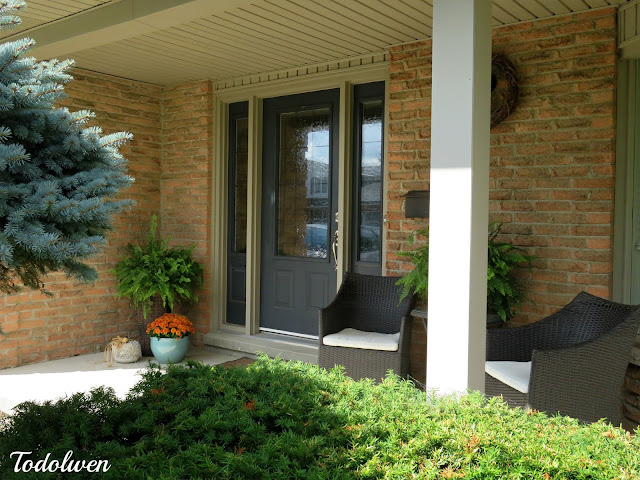 I am really starting to like this thing of decorating for the seasons of the year these days. Maybe it's something I should look into doing it a little more now. Whatever I do, if anything, I will make sure to share with all of you.

Before I go for today, I wanted to say "Thank you" to all of you for your kind well wishes ~ you are so thoughtful and sweet. A tiny update on my health ...

... the infection in my elbow is almost completely gone now now and my bite wounds are all healed up too but I now I might have broken a toe and badly bruised a few more. I don't know what it is with me right now ... bad luck maybe?!  How did it happen? Something fell behind one of the large drawers of our kitchen island and after I pulled the drawer out to get the lid that had fallen behind it, I tried to get it back in and after the first attempt didn't work, I pulled the drawer back out again and that too much and it fell onto my poor toes. Drawer and all of it's contents right onto three of my right foot's toes. Oh, did it hurt! I don't think I have used so much bad language in a long time whilst walking the pain off. Now everything is taped together and I am again feeling better. I really hope this ends my little spree of injury.

I hope all of you, my dear friends are well and that life is treating you very kind.